Got a SI Breaking News text during my class (BioEthics of all classes) and certainly made the three hour class go my much better. (Official Sports Illustrated Story here)

Alex Rodriguez has usually stayed away from criticizing Barry Bonds or speaking out against it but his fans and Yankee fans have certainly made it clear who would eventually hold the “Clean” Home Run Record one day. So much for that.

As if he wasn’t hated enough in New York, this certainly adds another flavor into the mix. I was listening to WFAN on my way back from Hoboken and a caller called in to say that the worst decision A-Rod made for his career was to come to New York. He has struggled to find his own identity since and one thing after another has really bogged him down from becoming the greatest player of all time – whether it was his marriage or relationship with the fans or steroids. I am certain Boston is quite glad this morning they lost the A-Rod battle to the Yankees on this one.

The Curse of the Yankees continues – alive and kicking since 2000.

In a candid interview with Katie Couric, New York Yankees superstar Alex Rodriguez addresses the recent controversy involving the use of steroids and performance-enhancing drugs in MLB baseball.

Here is one of those stories that even if you tried to make up you couldn’t get it as good.

A 13 year old girl taking a tour of Fenway Park earlier today was attacked by a hawk which drew blood from the top of her head. That’s a sad story regardless of who it happens to but intriguing sports part of this story comes out that this girl’s name was A-Rod… Alexa Rodriguez. Seriously, what the odds of a girl named that gets attacked in Boston’s baseball stadium known for its disdain towards the Yankee Slugger. Hopefully the stadium treats Alex Rodriguez just as nicely when he comes to visit a couple of times in the 19 times that the two teams play each other this season.

It’s good news to hear that girl from Memorial Boulevard Middle School in Bristol, Connecticut is doing alright and hopefully the Red Sox nation doesn’t lose one of their members to the dark side due to this. Get well soon young Alexa! 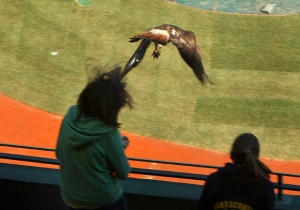 (picture from The Boston Globe)