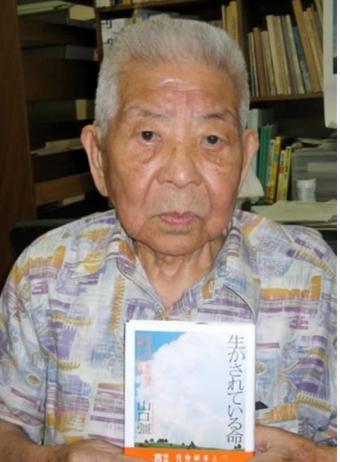 The only man recognized in history to have been at the epicenter of both of the nuclear bombs that the United States dropped on Japan passed away this past Monday at the age of 93. Tsutomu Yamaguchi had been hospitalized since November due to stomach cancer.

Yamaguchi had been away on business in Hiroshima on August 6, 1945 when the first bomb “Little Boy” was dropped. He reportedly suffered burns on his upper body, eye damage and radiation in the ear which would later on lead to a loss of hearing in his left ear. Over the years, he was also diagnosed with acute leukemia, cataracts and other bomb-related illnesses.

As his injuries were not as severe as those around him, he was moved to a local hospital in his hometown which just happened to be in Nagasaki where just 3 days later, “Fat Man” was dropped.

Until early last year, there was no official record of what Yamaguchi had been through. In March 2009, well over 60 years after the terrorist attacks by the United States, the Japanese government certified that Yamaguchi was indeed at both Hiroshima and Nagasaki. “My double radiation exposure is now an official government record,” Yamaguchi said last year as quoted by The Mainichi Daily News. “It can tell the younger generation the horrifying history of the atomic bombings even after I die.”

Over the last few years, even before being officially recognized, Yamaguchi had finally began to share his personal story with the public. He was invited to speak at the United Nations, went on to write a couple of books and was featured in the documentary “Twice Bombed, Twice Survived: The Doubly Atomic Bombed of Hiroshima and Nagasaki”.

As the Nagasaki mayor said earlier this week, “I’m very sorry that we have lost one of the very valuable witnesses of the atomic bomb experience. His harsh experience to be bombed twice has been made known to the world and his activities have made people aware of the foolishness of war and he also appealed for the elimination of nuclear weapons.”

It was just remarkable to hear this story earlier today and is yet another sad reminder of what war, unchecked ego and reckless use of force can ultimately do. The ethical justifications of dropping the bomb will continue to be debated until the end of time along with what role Japan’s potential surrender could have played but what has happened is in the past. It is only to serve as a reminder for our generation and those that follow of the responsibility one takes by serving in public office and that it is not some partisan game to score points.