Here is this 8th grader – Johnny Gilbert who happens to be a HUGE Buckeye fan and he’s on ESPN’s First Take talking about his bracket where he had the all Sweet 16 teams correctly predicted. This kid is no joke either where he randomly picked teams and happened to turn out lucky. Watch him speak about his bracket and what he did to choose the upsets like Western Kentucky, Davidson and Villanova into the Sweet 16. He even has Davidson going to the Final Four but has UCLA beating the Tar Heels in the Championship game. I certainly want to see this kid get as many picks correct as possible and what an awesome story that would be for this kid who through 64 games so far, has ONLY 7 incorrect picks.

The ESPN video is below and for his bracket, click here. Man I wish I had his bracket right about now.

Well the brackets were announced yesterday and certainly it was a surprise for me to see teams like Arizona State, Virginia Tech and Dayton being left out of the Big Dance. Certainly the selection committee has a hard job selecting the 34 at large bids after 31 automatic qualifiers and I won’t go into my rant about why certain teams were left out and why others got in. I don’t agree with Coach Knight’s argument of expanding the tournament to 128 teams which he says will quiet all the critics about why certain teams got in over others. No matter how many teams you put in, there will always be some left out… 65 teams in the current format, so #66, #67, and #68 complain about missing the tournament. You expand it to 128… team #129 and #130 will complain. The format is fine with the way it is and probably the only tweak I would think makes sense and I’ve heard this being tossed around a couple of places is expand the field from 65 to 68. So instead of having only 1 #16 seed compete in a play-in game… have all the 16 seeds do it. That way you get an additional 3 teams in and maybe quiet down the critics a little bit. 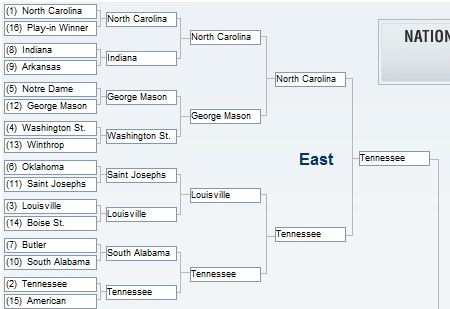 The East many people have said to be the toughest bracket out there and I only have 5 of the teams with the “better” seed advancing and that does include the 8/9 matchup of Indiana winning over Arkansas. I have the top 4 teams in this bracket advancing without a problem although I did not see Washington State at #4 play much this year. I was impressed with the top 3 seeds when I did see them play this year, who did well on a consistent basis. Notre Dame really disappointed me in the Big East tournament losing their first game and I really think they are going to come out flat and fall into the trap 5/12 game that happens almost every year. I have George Mason, who really made a name for themselves in 2006 by making the Final Four as the #11 seed, pulling off that upset. With the 6/11 game I think St. Joe’s really have the potential to pull off that upset and Butler at #7 gets a raw deal by playing a game in the South against the #10 South Alabama.

Teams going to the Sweet 16 from here are the Tar Heels who can just man handle Indiana at this stage. George Mason will continue their Cinderella” run for at least another round and the #2 and #3 seeds in Tennessee and Louisville advance without a problem.

I think the game to watch in this bracket will be the Elite 8 matchup between the top two seeds in North Carolina and Tennessee. Bruce Pearl’s team is really well coached and had the talent level to be seeded a #1.

Tar Heels were easily the #1 seed overall but in this tough bracket this will prove to be their downfall. Tennessee Volunteers survive the East Bracket to make it to the Final Four. 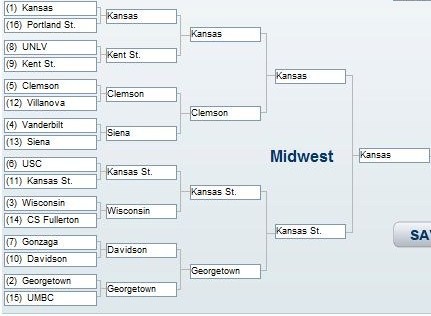 In bottom half of the left side of the NCAA bracket, I think only the top 3 seeds escaped unharmed and the first upset occurs in the 4/13 matchup with Vanderbilt and Siena. Vanderbilt loses on the road at Florida, Mississippi, Arkansas and Alabama during SEC play really trouble me and they lost to Arkansas again in the SEC tournament. Siena is riding a 6 game winning streak and I think they will make it 7. As for the 5/12 matchup here, I almost went with another upset but I just couldn’t. Clemson has just been playing too good for me to go against them. A team who beat Duke and almost toppled UNC in the ACC Tournament should be able to handle Villanova who was on the bubble and barely made the tournament. The game to watch in this bracket is the 6/11 matchup between USC and Kansas State… (I won’t repeat the stuff so just read in the section below). Rounding off the last two games are the 7/10 and 8/9. I am just not liking Gonzaga at #7 this year and for them to go up against Davidson is a tough match that I don’t see them winning. The 8/9 is UNLV against Kent State which is basically a tossup because either one will lose to Kansas in the second round but I’ll go with the upset here.

Kansas easily gets through with a win over the 8/9 and should have quite a game against Clemson who has been riding a real high at the end of this season. A couple of close losses for them during the regular to UNC and then another one in the ACC Tourney final should have them pumped to dethrone a #1 team. Kansas State led by Michael Beasley who can certainly be the Player of the Year should have his hands full against Georgetown who had a very deep run in the tournament last year.

The game in this part of the bracket easily comes in the first round with the 6/11 matchup with USC and Kansas St. O.J. Mayo and Michael Beasley who are easily the two most profiled freshmen in the country this year. You can expect there will be NBA scouts at this game as both of these guys could easily enter the NBA draft and you know teams like the Miami Heat or Seattle Supersonics will be looking to add one of these guys.

Kansas. The only #1 seed that I have advancing through to the Final Four. I contemplated sending Wisconsin through but my interest in wanting to see Beasley succeed stopped that theory. 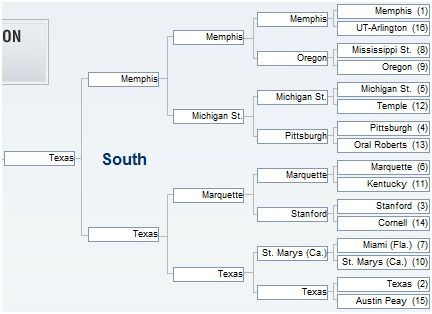 Probably the most secure bracket according to me, the top 6 seeds advance here without a problem. The “upsets” occur at 7/10 where St. Marys defeats Miami (Fla.) and #9 Oregon over #8 Mississippi St. Tough draw overall for Memphis though having to play Texas in Texas. The top two seeds here really should have no problem advancing through everyone else. I would look out for Michigan St. with Drew Neitzel or Marquette with their triple threat of Jerel McNeal, Dominic James and Lazar Hayward. This is probably their best squad since Dwyane Wade led the team to a Final Four in 2003 and have the potential to upset Memphis.

I would be considered for Memphis against Michigan State. Tom Izzo has a great record 24-9 in his career in NCAA games and for Memphis having lost only once all year long can see their dreams of a national title falling short against the Spartans here. I have always been a fan of Drew Neitzel and he has the same type of gutsy and just flat out hustle play that those of you at Stevens would associate with a Dani Dudek. In the other matchup, I think D.J. Augustin and company should have no problem disposing of Marquette who had a great run upsetting #3 Stanford but will fall short to Texas in their hometown.

Instead of the game to watch here I will say just watch the Oral Roberts team. They have the potential to give you upsets left and right. Pittsburgh has struggled when they have to go West to play in NCAA and they showed it last time by losing in the first round to Boise State in 2005. A team like Oral Roberts if they can get a win early certainly has the potential to upset Michigan State setting up quite the battle with #1 Memphis. Who wouldn’t want to see a #13 advance Elite 8… but I just don’t see it happening.

Tough draw for #1 seed Memphis here and with Texas playing in their backyard which certainly helps in high pressure games that all these NCAA games have. I’ll give the edge to Texas here in an excellent Elite 8 matchup. 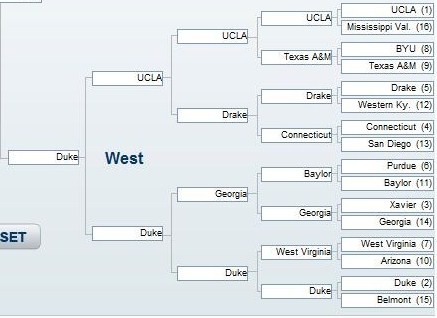 I have heard constant talks from “experts” that this is by far the weakest bracket. Yea this bracket has the potential for being rather bland but I think there is potential for so much more. You have powerhouses in UCLA, Duke and UConn. You have the great story with Georgia fighting their way into the tournament and certainly West Virginia with Joe Alexander has the potential to pull off some wins and how can you forget Drake who has certainly surprised everyone with their 21 game winning streak during the course of their regular season. I think the top two and UConn win their first matches no problem but Xavier gets a tough draw in the SEC champion Georgia who are probably the one team seeded that low that you want to avoid. I just don’t see how they get placed #14 after the way they finished off their season. Watch out for Drake who on a good night can upset UConn and I know its a stretch but can even overthrow UCLA if they take this team lightly. West Virginia (#7), Baylor (#11) and Texas A&M (9) round off the first round games in this bracket.

I don’t see Mississippi Valley, BYU or Texas A&M giving UCLA much trouble for them to advance this far but they will have quite a matchup against Drake and I am tempted to upset UCLA here but I just can’t get myself to do it. The lower part of the bracket I have Duke surviving against West Virginia going on to face Georgia who themselves with a couple of upsets will get there.

I think the Elite 8 matchup here between the Blue Devils and the Bruins should be really exciting and at the time of their potential matchup and a trip to the final four on the line should be amazing.

Duke history as the #2 seed includes a National Championship in 1991 and advanced to the Final Four in 1988, 1989 and 1994. I have my bias in favor of Duke so I will stick with them but I don’t see it being an easy task defeating UCLA out West but if they are going to do it, they need contributions from everyone… Kyle Singler and Greg Paulus have to lead the way… Scheyer really needs to step up and their lack of height really hurts them big time and could prove to be the downfall if they fall early in the tournament.

So I have Tennessee and Kansas on one half where I think Bruce Pearl’s team will prove to be too much to handle for Kansas and particularly coming of a win over UNC will help propel them into the National Title game. On the other side, Texas will be facing off against Duke and you know where I am going here. Duke and Coach K are 3-4 in the Finals of an NCAA tournament since 1986 and have not won since 2001 (before I used to pay much attention to college basketball)… I wouldn’t mind seeing them win it all now.