I usually don’t like posting very much about the Devils since I despise them with pretty much every ounce blood in me but there was something yesterday that I just couldn’t pass up. So here is an old friend of mine from high school who has gone to more New Jersey Devils games than anyone else I know. Just turns out that all that paid off yesterday as he was in attendance for Martin Brodeur’s return in which he blanked the Colorado Avalanche 4-0.

Brodeur’s win which his seven of the season now puts him at 545 for his spectacular career, leaving him just six shy of Patrick Roy’s NHL record of 551. He also recorded his third shutout of the season and 99th of his career, which puts him four short of Terry Sawchuk’s all-time NHL mark of 103. 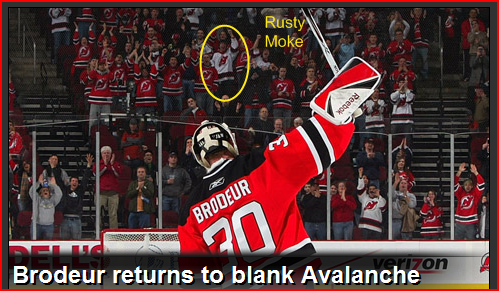 Congrats Rusty, he seemed in pretty good form for being out how ever many months he was out.

This is why NHL is the coolest sport on Earth. Where else can you find a player standing in front of a goalie trying to set a screen like this? I’m still not sure where I stand on the issue though. On one hand, it is trying to distract the goalie by obstructing his point of view but you can also argue that since he isn’t even looking at the puck, there should be some sort of rule against that. Basically, Sean Avery gets in front on Marty Brodeur and starts waving his stick and does everything he could to distract him and obstruct his view. This goes on for a little bit and you can clearly see a frustrated Brodeur. I’m not sure why any of the Devils’ players just didn’t deck him to the ground.

The NHL wasted little time however following the incident to enact the following unsportsmanlike conduct rule.

“An unsportsmanlike conduct minor penalty (Rule 75) will be interpreted and applied, effective immediately, to a situation when an offensive player positions himself facing the opposition goaltender and engages in actions such as waving his arms or stick in front of the goaltender’s face, for the purpose of improperly interfering with and/or distracting the goaltender as opposed to positioning himself to try to make a play.”

I don’t blame them for doing this right now and certainly you know the GMs and Owners will talk about this during the off season but this looks like a decent enough patch up for this playoff season. Even though Brodeur allows the goal the following play, you have to wonder if the antics of Sean Avery paid off from the play before.