Ain’t that the Truth?

Got this from a friend earlier today…

Some in the media are declaring the series over because the Boston Celtics have won four of the six games played so far. But I don’t understand why, with a series this close and hotly contested, anyone would want to shut it down before we play a seventh game and have all the results in. As anybody who follows the NBA knows, a seven-game series would be good for the league, and the added competition would make the eventual victor, whomever it might be, a stronger opponent against the Los Angeles Lakers in the Finals….

Yes, Boston has won four games and Detroit only two. But it’s hard to imagine a more arbitrary and undemocratic way to determine this series’s outcome than “games won.” It is, after all, a bedrock value of the game of basketball that all points must be counted. But how can that be the case when every point beyond the winning point is ignored? There are literally dozens of layups, jumpers, free throws, and (yes, even) dunks that our opponents want to say don’t count for anything at all. We call on the NBA to do the right thing and fully count all of the baskets that were made throughout the course of this series.

Once you abandon the artificial four-games-to-two framework that the media has tried to impose on the series, a very different picture emerges, with the Celtics leading by a mere 549 points to 539. Yes that’s right, the margin between the two teams is less than one percent — a tie, for all intents and purposes. This is probably the closest Conference Finals in NBA history, though I will thank you not to check on that.

Maybe ESPN is getting carried away just a little bit and already has put the Celtics and Pistons into the next round. Although it certainly looks like since it doesn’t seem to be the case that Boston will lose at home but it might be a troubling issue down the road.

Note: It got changed right away but it’s still funny. 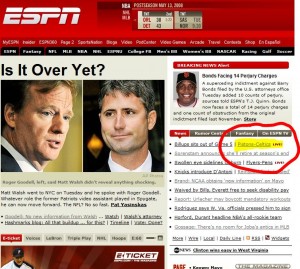 I know Celtics are one of the favorites to win it all this year but through their ups and downs in the playoffs so far certainly had raised plenty of doubters. After watching this clip, I have a feeling KG is gonna continue to step up and literally carry his team even if Ray Allen and Paul Pierce struggle some more.

By the way, I was telling a friend of mine who has recently gotten into basketball about the type of player Bill Russell was… and man, what a person he is off the courts now.

Just a little sneak peek into his career highlights and awards:

Do you believe in the Golden State Warriors now? A 33-21 team that is on the outside looking in, on the playoffs in the Western Conference played one heck of a game last night against the Boston Celtics… a thrilling 119-117 win in regulation against the best team in the league. If a basketball clip is going up, you know I watched the game with Joe.

Coach draws up the play for Baron Davis and once again, he finds a way to deliver. Here is the clip so the rest of you can enjoy it as well.