A funny take on Chad Johnson legally changing his name to Chad Ocho-Cinco. Now I’m never a fan to link to anything that has to do with New England Patriots unless its about an injury of theirs or them losing a game in the Super Bowl after going 18-0 but here is a great piece: 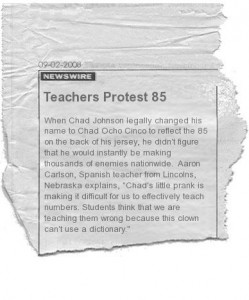 When Chad Johnson legally changed his name to Chad Ocho Cinco to reflect the 85 on the back of his jersey, he didn’t figure that he would instantly be making thousands of enemies nationwide. Aaron Carlson, Spanish teacher from Kearney, Nebraska explains: “Chad’s little prank is making it difficult for us to effectively teach numbers. Students think that we are teaching them wrong because this clown can’t use a dictionary.”

Why is Carlson, and many other Spanish teachers so upset? “Ocho cinco” actually means “eight-five”, while “ochenta cinco” or “ochenta y cinco” would be the correct formations of 85 in Spanish.

“I really don’t care, you cant stop me either way,” related Ocho Cinco. “Maybe next year I’ll go with Acht Fünf. That’s some German right there.”

Due to a torn labrum it is uncertain when Ocho Cinco will be sporting the new jersey on the field. Ocho Cinco has said he hopes to play this weekend against the Baltimore Ravens. Any time will be too soon for Mr. Carlson. “I can only hope he’s out for at least 4 weeks. We’ll be done with 2-digit numbers by then.”