I mentioned in an earlier post about the great sportsmanship by two girls playing Division II Softball who carried their opponent around the bases for her first and only home run in her career because she blew out her knee. The game was between Western Oregon and Central Washington and the girls involved are Sara Tucholsky along with Central Washington first baseman Mallory Holtman and second baseman Liz Wallace. Holtman is the career home run leader in the Great Northwest Athletic Conference where the two colleges compete.

Well here is the only known footage that exists of that game in a short segment put together by ESPN.

I had planned to write about this last night but I was just too tired from class and coming home. I did become certified to coach soccer yesterday from NSCAA. It went by faster than I thought and Coach Tim O’Donohue who taught the course really did well. The only other experience I had with him was on the field when he is a passionate, fiery person to say the least but seeing him off the field and talking to him about soccer and just hearing what goes on in his head during a game was awesome. I’m thinking of maybe helping out with the Academy Eagles next year – maybe I’ll talk to Coach McNulty this week and see what she thinks (btw, she’s still the best coach I’ve ever met).

Anyways back to what I was gonna write about. It’s a remarkable story of sportsmanship unlike any other. My sister has it up from yesterday (link) and I’ll throw in an except from what she wrote.

While playing in a College Softball game (the loser would be eliminated from the playoffs), Sara Tucholsky scored her first home run (ever) but collapsed near the first base because of a knee injury. According to the first-base coach, her team could not help her because she would be called out, and even if a pinch runner was put in the home run would just count as a single. Unbelievably, two girls from the opposing team — vying for the playoff spots — picked Sara up and helped her touch the remaining bases and brought her back to home base.

In this day and age, where most people don’t even bother helping others in every day situations that would have no effect on them, these amazing girls helped the opposing team in a competitive setting, just so the results would be fair and Sara and her team would get what they deserved, while knowing they would be eliminated from the playoffs. – link

Below is a thumbnail of the two girls carrying their opponent around the bases. I read a couple of stories on it yesterday and one that really caught my eye was by George Vecsey from the NY Times where he asked whether the Oakland Athletics would have carried Kirk Gibson around the bases after he hit the home run off of them or really if we would have seen it anywhere else in professional sports. Maybe it’s a gender thing that the girls would do it the guys wouldn’t, maybe I’m just jumping to conclusions but it’s a great story nonetheless. 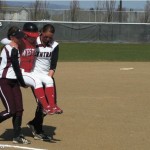