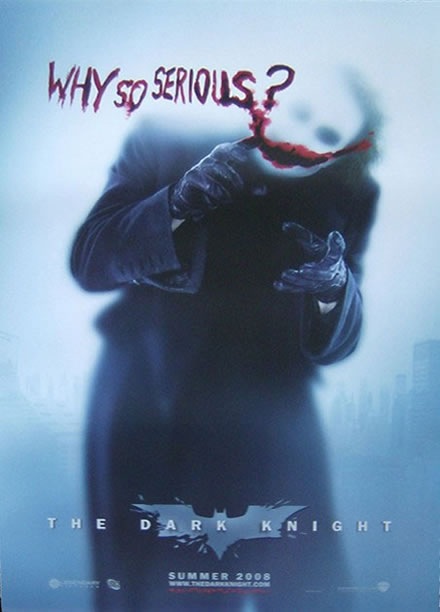 The Dark Knight is the first film I can remember in a really long time that lasted about 2 and a half hours but did not a dead scene or left the audience asking: When is this movie going to end?

The promotional campaign leading up to the release of movie was remarkable and certainly there were some (albeit a few) but some doubters who wondered whether all this promo would actually yield a decent movie. After seeing it yesterday, I can definitely say this movie has one Academy Award winner if not more. I bought the ticket online just to make sure it wasn’t sold out and even though I got stuck watching it in Menlo Park, it was still a packed house.

Read an excerpt below from Peter Abraham’s Yankee Blog on his review of the movie which accurately sums up what I was thinking.

Director Christopher Nolan starts with a gripping scene and there’s one after another right until the end. There’s no building to a climax here.

Mark down Heath Ledger for a posthumous Academy Award. The Joker is his greatest role and he was better than Jack Nicholson, which didn’t seem possible. Christian Bale does the brooding Batman thing better than the previous Batmans and adds a nice touch of irony.

The supporting cast is over-the-top good. Michael Caine and Morgan Freeman are the wise old heads on Batman’s staff. Gary Oldman is the incorruptible cop. Also dug Eric Roberts as a mobster. Maggie Gyllenhaal is the girl in the middle, Batman’s secret love.

The third man in to the Batman/Joker battle is Aaron Eckhart as Harvey Dent. He’s the key to the whole film from a story sense. The Dark Knight isn’t remotely a goofy comic book movie. It’s a classic battle of good against evil where the protagonists happen to be comic book characters. This film has much more the tone of Michael Mann’s Heat in that it’s about Gotham and it’s internal struggle. Things have to get worse before they better in Gotham and do they get worse. The city (Chicago, never looking more sinister) is a character in the film as much as any person.

The obvious theme that becomes clear right from the start is that you cannot trust anyone. Cops are bad, criminals at times make the better decision, trust kids to do the right thing and no one is safe. No one.

The Joker easily steals the show in this movie and at first I thought all the hype that i had heard and read about leading up to watching this detracted from his Oscar-worthy performance but the more I think about it, the clearer it becomes that he deserves the awards. As Peter wrote, “The most amusing moments are from Ledger, whose Joker is equally a sadistic anarchist and comedian. He makes blowing up a hospital hilarious. This is not a flick for the kids. It’s complex and disturbing at times.”

Don’t flip a coin, go see this and if you get a chance, go see it in IMAX.