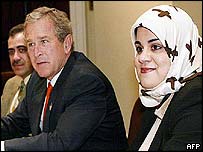 I got this email just about half an hour ago stating that as part of Women’s Programs and Graduate activies, Zainab Al-Suwaij will be hosting “Women’s Equality in the Muslim Word” on Tuesday, March 23, 2010 at 9:00 PM in the De Baun Auditorium.

At the age of 20, Zainab was one of the few women to join the 1991 intifada uprising against Saddam Hussein. After it’s failing, she went into hiding and eventually fled to the US where she became and citizen and a respected professor at Yale.

Co-founder of the American-Islamic Congress, Zainab provides an eye-opening account of her experiences as a Muslim-American & serves as a bridge across cultures, religious divides, & political differences.

I don’t think I have ever heard of the American Islamic Congress where she holds the position of Executive Director but this is their mission statement:

The American Islamic Congress (AIC) is a civil rights organization promoting tolerance and the exchange of ideas among Muslims and between other peoples. AIC challenges increasingly negative perceptions of Muslims by advocating responsible leadership and ‘two-way’ interfaith understanding. As Muslim-Americans, thriving amidst America’s open multicultural society and civil liberties, we promote these same values for the global Muslim community.

So I think any civic organization that is working towards achieving moderation and promoting tolerance between people of different faiths is certainly something worth listening to.

I will be attending the event later this month and will hopefully be able to provide a follow up to the event. If you go to Stevens or are even in the area, I urge you to attend and take a look for yourself and make your own judgment and even take part in the discussion on culture, religion and gender.