I finally made my first trip down to Orlando to see Universal Studios and a couple of the Disney Parks and my initial and last reaction was: anyone who wants to be a kid again, certainly can be at these parks.

That statement is probably more true for Disney then for Universal simply because Universal seems to be geared more towards roller coaster rides and less towards the characters and cartoons we grew up around in our very young ages.

It is probably no coincidence that more parents and the older folks tend to enjoy Disney parks like Magic Kingdom and Epcot more because they often see characters walking about and around the park that they, themselves, knew when they were young. I can’t remember the last time my parents went out to an amusement park or any park in general with such attractions and really had a great time. From the 4D shows of Mickey and his orchestra to Mission: Space to Universe of Energy with Ellen Degeneres and Bill Nye the Science Guy.

For me, those were the two parks I visited (Epcot and Magic Kingdom) and as much as I loved the attractions such as Mission: Space and Soarin’, I was a bigger fan of getting my picture taken with the characters I grew up watching on television. A couple of characters that I wanted to run into while I was at the parks were Stitch, Donald Duck, Goofy and Buzz Lightyear. I was lucky enough to get three out of the four and I was quite disappointed not seeing any Toy Story characters or attraction but I will not complain too much. As you can clearly tell from the pictures I have attached at the bottom of the post, I don’t seem very disappointed in not running into Buzz, Woody and the gang.

1- Stitch was an instant hit for me the moment Lilo and Stitch the movie was released. His unpredictable antics and always causing trouble for Lilo was amusing as a child yet very intriguing to view things from his perspective. His alien-esque finger waving was something I emulated with him when I went up for a picture — something that wasn’t caught on camera unfortunately– but even with my older cousins this character was on top of their list. 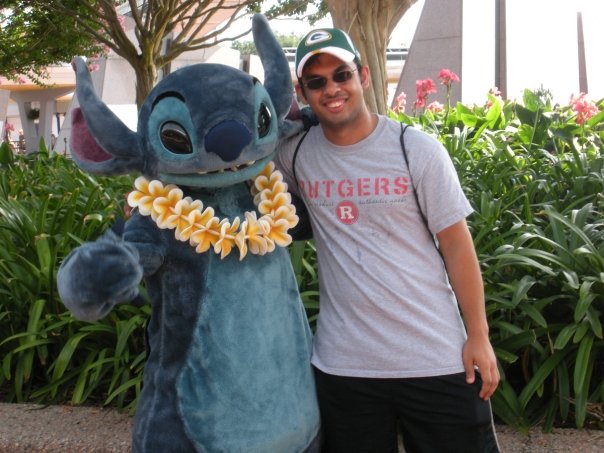 2- Goofy. I have been told (on more than one occasion) that I am not the most serious person and often very silly or… goofy. It’s probably something I take pride in, always looking to lighten the mood regardless of the situation. You just can’t spend every day trying to be being serious and having every minute of your day all planned out– let things come to you and if Goofy wants to point at your shirt of him, you point right back and have a picture taken. I have no shame in being a kid again and taking pictures with Mickey, Minnie, Pluto in addition to Goofy and Donald. 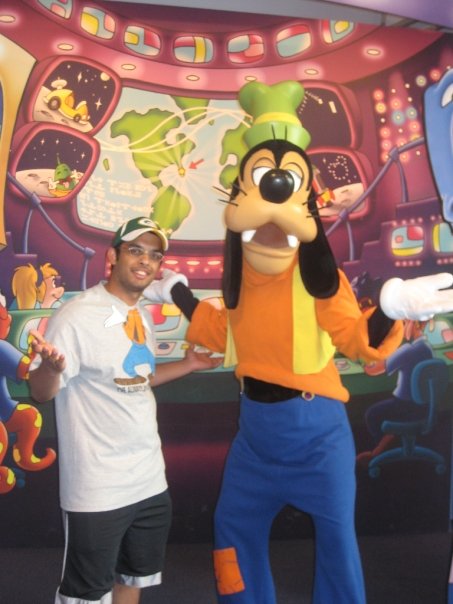 3- Donald Duck. You can’t be an Angry Brown Guy and not have your picture taken with an angry duck. It seemed like in every cartoon that his nephews Huey, Dewey and Louie were always finding ways to aggravate him more and it is probably safe to say Donald had a very short temper. Watching his lose his cool and his blue hat fly off his head is an iconic image of Mr. Duck and I have always been a fan. 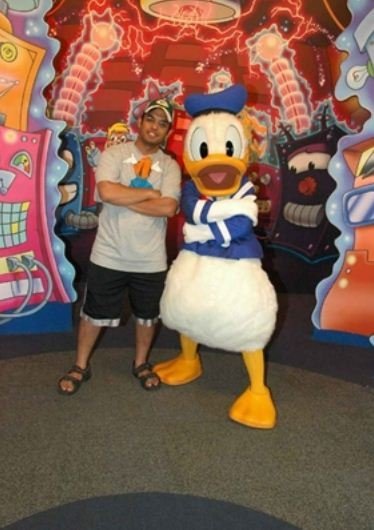 I am sure that it was disappointing for me and everyone else in our group that we did not run into any Toy Story characters especially with the new movie set to be released next year but what can you do? I had a great time at these parks being a kid and enjoying the attractions designed for maybe a younger audience. At times it seemed like we were waiting in line with kids that seemed to be half my age and other times with people twice as old.

It really goes to show that at Disney, any body and every body can be a kid again.