For an Apple event, it was pretty dull. Nothing terribly new and I wasn’t impressed with the new iPhone but the following just blew my mind but technology has certainly come a long way and it is certainly a bit freaky.

The following is from New York Times’ live blog of the Apple event earlier today discussing the new feature on the iPhone called Siri — a personal voice-control assistant that Apple purchased last year. I will try to find a video of it if I can, otherwise the text is plenty enough.

“We left one thing out,” says Mr. Schiller. “It’s about our voice.” This is the fruit of Apple’s acquisition of Siri, a startup that has been working on voice-control features. Siri is now a feature on the iPhone. “It’s an intelligent assistant that helps you get things done, just by asking.”

“Probably the craziest thing you can do is do a voice-recognition demo on stage, live,” says Mr. Schiller. “But we’re going to do it anyway.”

Mr. Forstall asks, “Do I need a raincoat today?” The phone replies, “It sure looks like rain today,” and shows the weather screen again.

You can ask Siri for directions. It can read text messages to you. You can reply or ask it to read them again.

Siri can schedule events in your calendar, read messages, take dictation, all by voice. You can create a reminder by voice. “Remind me to call my wife when I leave work,” says Mr. Forstall. Siri, based on previous conversations, knows who your wife is and uses geolocation to remind you when you leave a location. You can search Wikipedia by voice.

Apple has also linked up with Wolfram Alpha to provide data and definitions for Siri to access. “Define mitosis,” says Mr. Forstall. Siri generates and reads back a definition.

We are clearly headed to Terminator/HAL territory here. Humans are doomed. Deal with it.

Mr Forstall asks Siri, “Who are you?” Siri replies, “I am a humble personal assistant.”

Jenna Wortham adds: Will this kind of personal assistant technology turn into the latest battleground between Apple and Google? Android has already baked several voice-recognition features into its software, including transcribing voice messages to text and letting users browse the Web using verbal commands. But Siri could help nudge the technology into the mainstream.

More voice recognition: Anywhere a keyboard appears on the phone’s screen, there will be a microphone button, so you can dictate anything. Siri will initially support English, French and German. It will be released in a beta version, with more languages and features added in time.

I just downloaded WhatsApp Messenger on my Android.

It is a Smartphone Messenger which replaces SMS. This app even lets me send pictures, video and other multi-media!

WhatsApp Messenger is available for Android, iPhone, Nokia and BlackBerry and there is no PIN or username to remember – it works just like SMS and uses your internet data plan.

Get it now from http://www.whatsapp.com/download/ and say good-bye to SMS.

Although it is pretty convenient to use, it still is not the solution to everything. I have this on my phone but I will still rather prefer to email anyway.

The things I do like about it are the ability to group text, send images or other forms of media instantly to everyone in your group. Since this uses your data plan, it allows you to text/mms people at any number around the world.

If you have already downloaded the app, let me know what you think of it.

It took a ridiculously long time for MMS to be enabled on the iPhone but it is finally here. Here’s how to enable it on your phone if you haven’t done it yet.

2. Connect your iPhone 3G or iPhone 3GS to your computer and open iTunes.

3. Once the iPhone MMS update is available, you will see the following message on iTunes: “An update to the carrier settings for your iPhone is available. Would you like to install it now?“. Click “Update Settings“.

4. After you click “Update Settings“, iTunes will show the following message: “Your iPhone carrier settings were updated successfully“. Click “Ok“.

You should now have MMS on your iPhone 3G or iPhone 3GS!

Note: This won’t work on the iPhone 2G. 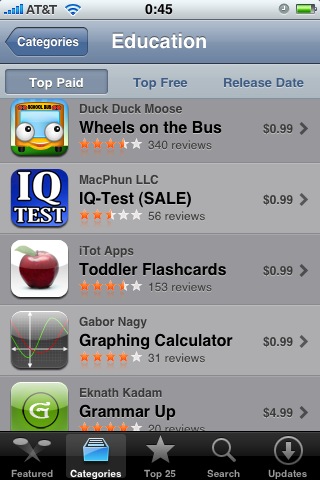 Usually I am all for buying things online and even talking to customer service over the phone or online instead of physically going to the store to deal with a matter. For some reason, when my headset for the iPhone stopped working I decided it would be a great idea to go to the store to get a replacement instead of trying to see whether they could mail it to me.

I walked into the Apple Store at Menlo Park Mall and was immediately greeted by a nice guy who asked me about my problem. I ended up going to the Genius Bar desk where I went on to describe that recently my right side of my headset stopped working. I probably could have lasted longer with my headset but that is also the side with the microphone that I use to talk on the phone so the problem escalated in priority for me. The first lady who looked at my headset went back to ask a “technician” whether this was covered in the AppleCare Protection Plan. On their own website, it clearly states that the plan “covers iPhone & iPhone Bluetooth hands-free headset and included accessories” which I think is fair to say covers my problem.

Initially, they tried to scheme me into admitting that I physically broke my headset by either stepping over or not “properly” using it. I was there with my brother where we both argued what is the point of the Protection Plan if it does not cover a simple problem like the headset? After being quite disappointed with the level of customer service I walked out and ended up calling Apple Customer Service before I even reached my car. The guys (Brian & Scott) on the other end were very friendly throughout the entire conversation. All he did was ask me about my problem, asked for my serial number and told me to wait 2 minutes while he asked someone whether he could help me out. 2 minutes later, he came back on the line to tell me that he was ready to mail me my new headset.

Since I was already out when I called, I asked him whether I could just pick it up at the store instead of him having to mail me and having to wait a couple of days before I could have this problem fixed. He told me some CS code or number and gave me his direct line in case the store employee gave me trouble.

I walked back in the store and lady that initially told me that I couldn’t have a replacement listen as I explained that I called Apple Customer Service and they issued me a code that I can pick up a replacement headset for free. A couple of employees including the manager there at the time looked me like I had 3 eyes on my face or was an alien or something. They seemed to have never heard of this number issued by Customer Service to customers. The lady took the phone number and the CS code and walked into the backroom saying she would be right back. About 10-15 minutes of waiting later, she walked out saying she could not reach the person and was only getting his voicemail. I took the piece of paper back from her, dialed the number myself and reached him immediately – which makes me question how much she really tried to reach the guy. So I ended up calling Scott and had the in-store manger talk to him as he explained what he had done for me.

After having this discussion, I thought my troubles would be over and they would simply just hand me a headset… and I couldn’t have been more wrong if I tried.

Turns out even for a simple replacement, they needed me to schedule an appointment where they needed to fill out paper work for the replacement equipment and needed a “technician” to come out and replace the part for me. I just cannot believe that they needed a technician to issue me a new headset and somehow the person behind the Genius Bar couldn’t do a simple parts replacement. The manager tells me to wait until the next technician which he couldn’t give me an accurate estimate on how long it would take. He estimated it would be 10 to 15 minutes and after a 20-25 minute wait later, a guy named Dan who I presumed is the “technician” called me up, entered took my name/email/serial number and printed out a receipt along with my replacement.

So about one hour, two phone calls to Apple Customer Service and talking to five different Apple employees later, I painfully and finally got my replacement headset.