Just really really funny speeches by both candidates that shows a side of them you rarely get to see over the course of the ugly politics that goes on during the primaries and national campaigns. The two men spoke at the 63rd annual Alfred E. Smith Memorial Foundation Dinner, a charity event organized by the Catholic Archdiocese of New York for the benefit of needy children.

A couple of Obama quotes before you the video:

“In the last few weeks, John’s been out on the campaign trail and asked the question, who is Barack Obama? Now I have to admit I was a little surprised by this question. The answer is right there on my Facebook page. But, look, I don’t want to be coy about this. We’re a couple weeks from an important election. Americans have a big choice to make, and if anybody feels like they don’t know me by now, let me try to give you some answers. Who is Barack Obama? Contrary to the rumors you have heard, I was not born in a manger. I was actually born on Krypton and sent here by my father Jor El to save the planet Earth. Many of you — many of you know that I got my name, Barack, from my father. What you may not know is that Barack is actually Swahili for ‘that one’. And I got my middle name from somebody who obviously didn’t think I’d ever run for President.”

“But I know senator McCain agrees that some of the rumors out there are getting a bit crazy. I mean, Rupert the other day, Fox news actually accused me of fathering two african-american children in wedlock.”

I know that 18 or however many days left now is still an eternity in a political election but after last night, people need to start asking the question “By How Much” instead of “If”. 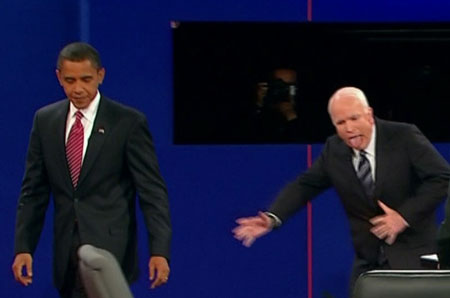 Well along with solving our economic problems, the McCain-Palin campaign has also decided to provide this country with a time machine… This ad was spotted by a couple of people reading the Wall Street Journal earlier today.

Just a hunch but I have a feeling this isn’t going to end well for McCain if keeps his stance on suspending his presidential campaign. Video is after the break but look at these strong words by Craig Ferguson. McCain camp is getting either really desperate and attempting a cheap publicity stunt that they think will win them points or they just really dropped the ball on this one.