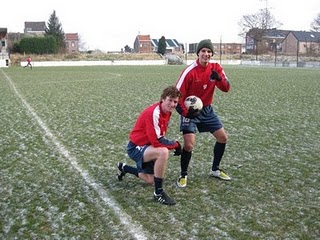 I definitely put off recommending blogs in the segment “ABG Recommends” much longer than I would have liked but as this week’s snowpocalypse allowed me to get some work done, I’ll recommend one now. This one is called “The Two-Headed Think Tank” and its co-written by Niko Gkionis and Matt Friesen who were both teammates in Belgium for a little while.

Niko Gkionis is a professional soccer player who currently plies his trade in the Belgium 3rd division for Excelsior Veldwezelt. Born and raised in New Jersey, Niko probably likes MTV reality television shows just as much as I despise them but we can both agree to like sports of all kinds. He graduated with a degree in Chemical Biology from Stevens Institute of Technology. I saw Niko play for two years when I first came to Stevens and he’s still probably one of the best players I have seen play in D-III all these years later.

Matt Friesen spends his days in the rain of the NW playing soccer for the Kitsap Pumas, members of the NW division of the USL’s PDL. He’s pretty much been a West Coast boy his entire life as he was born in California, raised in Oregon and attended Whitworth University (in Spokane, Washington) graduating with a degree in Computer Science.

At first I wasn’t sure how this blog was going to work out since one of the two guys takes a relative topic in the sports or entertainment world and puts up their view and the other is left to reply in the following post. It is quite a novel idea and I haven’t seen too many other blogs like it that post a reply to one of their own posts.

According to Niko,”the blog touches on a lot of the major sports news since that is what we mostly talk about. Soccer is a big subject on the blog of course and we have some nice debates back and forth since Matt and I sometimes have differing views on soccer.” They have touched on topics from American soccer to Tiger Woods to even a mention of the television show “Jersey Shore”.

It has been quite refreshing to see a different style of narrative on a blog with rebuttals and sometimes contrasting styles instead of the usual boring single-person blog (myself included) and if you’re looking for that type of perspective from two guys who are in their early-to-mid 20’s, this is the blog for you. The blog is still relatively new as they started in January of this year but they have been pretty good in updates with about 10 topics with a rebuttal for each to keep things fresh.

So if you are looking for some healthy banter, make sure to give them a visit. I have links to the blog at the top and bottom of the post along with their Twitter handles if you so desire.

Niko Gkionis is a professional soccer player who currently plies his trade in the Belgium 3rd division for Excelsior Veldwezelt. Born and raised in New Jersey, Niko has a strong affinity for MTV reality television shows and sports of all kinds. He is a educated man as well who received a degree in Chemical Biology from Stevens Institute of Technology. http://twitter.com/ngkionis
Matt Friesen spends his days in the rain of the NW playing soccer for the Kitsap Pumas, members of the NW division of the USL’s PDL. Been West Coastin’ his whole life, born in California and raised in Oregon. Matt attended Whitworth University and holds a degree in

Computer Science. He enjoys reality television, GOOD music, and sports, just sit back and listen to what he has to say.