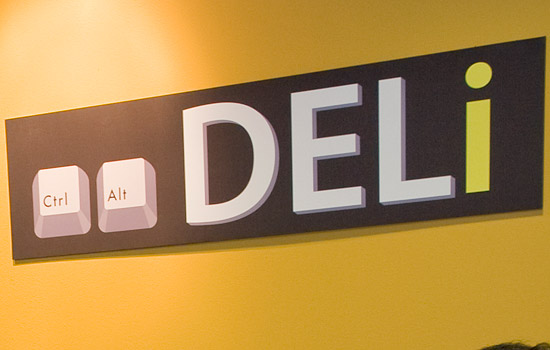 A friend of mine over at RIT who was “slightly embarrassed” of the name just informed me of about the geekiest convenience store name. It is called Ctrl Alt Deli (pronounced “Control Alt Deli”) which recently opened up on the campus of Rochester Institute of Technology and I have no shame in admitting that I wished we had such a name on the campus of Stevens — unfortunately we are stuck with America’s Cup, a respectable name with historical significance to our campus but not nearly creative enough.

I find it hard to believe for a student who goes to an Institute of Technology school would not find such humor and creativity amazing. There was a contest held where the name was eventually selected from an entry by a freshman computer science major.

Also for a fan like me who loves DOS, I think its awesome that each menu page with a DOS line command “C:\> dir” that allowed you to see the available files in the current and/or parent directories which in this menu case allows you to see the sandwiches or wraps available in each section.

The complete menu for the Deli is available in all of its geeky design here: CTRL ALT DELi Menu.