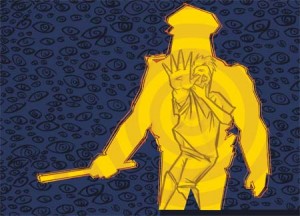 What happens to an excessively drunk man who had a blood-alcohol level more than four times the legal driving limit and was looking for a fight? Well since he was in Philadelphia, he found that fight was physically assaulted, had his head smacked into the concrete floor, tossed into a metal garbage can and then beaten up some more — and all of that by two uniformed Philadelphia Police Officers.

According to the report:

Police charged Foley with harassment, reckless endangerment, disorderly conduct, failure to disperse and resisting arrest; in August 2009, a judge acquitted him of those charges. Foley filed a complaint with the Philadelphia Police Department’s Internal Affairs Division (IAD). In November 2009, IAD sustained one charge against Corcoran for not filing a Use of Force Report. But IAD decided that Foley’s charges against Corcoran could not be proven.

In January 2009, just three months after Foley’s arrest in Old City, Corcoran punched a wheelchair-bound man in the face while on patrol in Grays Ferry. That man, too, ended up in the hospital. In that case, IAD found Corcoran’s use of force justified.

In this case, you have one side that clearly would have a motive to alter the truth of what possibly could have happened that night and then you have two other parties (the two witnesses and unrelated to the victim) who have absolutely no reason to do so.

There are three ways to think about what happened in Old City that Halloween evening: The first is that the cops’ version of events is accurate, and LeeAnne Mullins and I — who know neither each other nor Foley — either lied about or misinterpreted what we saw. The second is that it’s an aberration, which just so happened to occur outside this newspaper’s office and, consequently, drew the paper’s attention — to put it another way, perhaps it was blown out of proportion. The third is more troubling: What if this case was unique only in that it took place in front of patrons and tourists and celebrants and, yes, reporters — people who aren’t used to seeing cops behave this way? What if this behavior isn’t unique at all, it just usually happens in the city’s shadows, away from the public eye?

As you go on to read the rest of the story, it gets even more disturbing because when you have the city citizens wondering who they should turn to in cases of emergency when it is members of their very own Police Department who are committing these crimes.

“I was exclaiming, ‘I can’t believe this is happening,'” a witness testified. “Like, can you do something? Call the police. They’re already here.”

The scary thing throughout this whole ordeal is that it just not the Philadelphia cops at blame here; there are similar types of actions occurring all over the country without much act of accountability by their respective Police Departments or the judicial system. The United States has become such a nation of fear and continues to move towards an authoritative state where there is literally no one left to question the authority and those in power continue to get away with whatever they want.

Prior to reading the report, a very good friend of mine who currently goes to school in Philadelphia told me,

The cops sat us down after a snowball fight last night, saying inappropriate things. It was messed up.

I have known him for over nine years now and he is not one to comment on every issue that decides to come up so when he actually does, I make sure to listen because it definitely carries weight and authenticity.

I wrote about an incident just over a year ago titled “We Live In A ‘Police’ State” that talked about police brutality of a particular case in California. While power trips are to be almost expected by those in positions of power, especially those uneducated, what shocks me most is the lack of condemnation by fellow police and especially public officials.

How are the people supposed to trust a system to protect them when that very system is the one attacking them?

I have left this photo until the end of those with a weak stomach. It is a picture of the victim mentioned above in the Philadelphia incident.

THERE WILL BE BLOOD: This cell-phone picture captures Michael Foley toward the end of his encounter with Officer Kevin Corcoran on Oct. 31, 2008, in Old City.

Really makes you wonder when this type of stuff happens in public, what these guys are doing to the people when there isn’t a crowd around them and when they aren’t in the public eye.  Let your voices be heard and make sure these types of police brutality doesn’t go unheard.