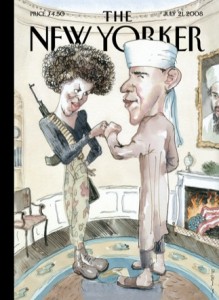 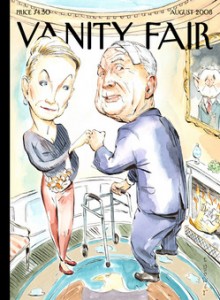 It seems like the two issues full of satire but certainly can be taken as offensive material.

The misconception about Obama being a Muslim has certainly been fueled by the Right and their constant allegations as the cover on the left shows. You can also notice the potrait that is hanging as well as the burning flag in the fireplace. It certainly doesn’t sit well with the Obama campaign but The New Yorker argues that it is only designed to show the numerous misconceptions that still exist about Obama.

Vanity Fair followed up the satire with one of their own on McCain. It shows an old man with a portrait of his supposed idol in George W. Bush as well as his burning the Constitution in the fire place.

Obama Camp can cry foul all they want about the this satire but they have to take it for what it is – a SATIRE. They need to start doing a better job to fight the smears or misconceptions that the public may arrogantly still believe. For McCain, I am certain he is getting tired of the age jokes and this certainly highlights that. Also, he can argue that is not burning the Constitution by any means but if he was going to stand by and allow the “satire” from The New Yorker Magazine, he must also accept the favor from Vanity Fair.

Personally I think it should be allowed to show because whether you like it or not, they (being The New Yorker or Vanity Fair or any Dutch Newspaper for argument’s sake) has the right to publish what they want. I might not agree with what you have to say but I will sure argue the heck of it to make sure you have the right to say it because the moment you start limiting free speech because of it being deemed insensitive material, you start heading down a slippery slope that does not bode well for the rest of the society.

So all this humor? Tasteless material? Does it belong in the age of politics right now that is constantly fueled by misinformation or are we the public becoming too touchy where anything that remotely touches a nerve is quickly shot down.