So I got relatively good responses from those that read my “Academy Soccer: Tradition Never Graduates” post and I had even submitted it into Mastermind Media and was awaiting a response because I do not think they had ever published an article written from an alum before. Well if they hadn’t, they have now. I have been told that it is in the November 2008 issue that I have put up scans of below and I even have the entire paper available if someone wants to read it. 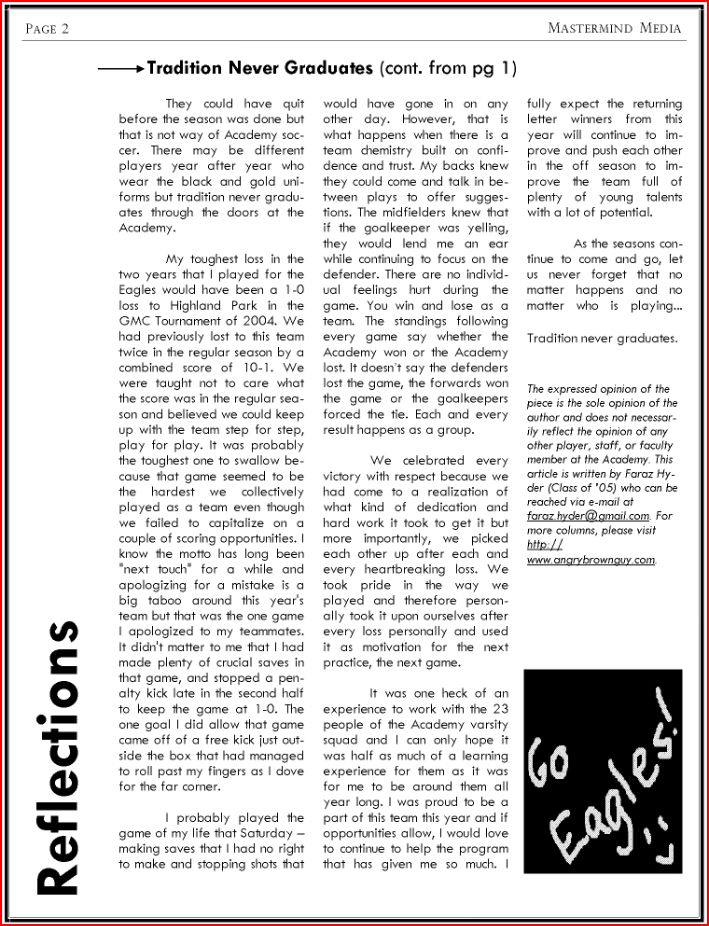 I attended the Academy soccer awards night last night and decided that I would put up the piece I submitted to the MasterMind Media about the group of guys and girls that I coached the past few months. They were truly a team in every sense of the word and while I may have teased them or pushed them at times,  I still gained a lot of respect for them with they way they work as a unit and have developed individually.

Although the Academy soccer team may not have had the greatest season in program history, the development of younger talent and establishment of camaraderie is unlike anything I have seen from an Academy team. I was part of the few students that lobbied the administration and the district for Academy’s first ever sports program and I have been a part of or have been following the team since its inception in the 2003 season.

When I first started assisting in coaching these young student-athletes, I really did not know what to expect. I had been removed from high school life for over three years and that certainly brings some change in the environment. However, these athletes were eager to learn in practice like I have never seen before. They were ready to learn and accept advice from each other and more importantly from a stranger most of them had never seen or even heard of before. Some were real easy to talk to because they would come seek your advice or just be around looking to discuss every other play while for others, it was a little more of a  daunting challenge but nothing insurmountable.

It is never an easy task to change the collective mindset of a team with 20+ bodies, but the learning environment helps. Coach McNulty long ago instilled the confidence and belief in me that individual talent can be beaten by a cooperative team effort any day of the week. That is one of the most visible trademarks of her teams and you can see from a mile away. She may not always have the most talented team but you know her coaching style is going to tap the most potential out of every player that steps into a game and in return the players soar to success that would not have been possible otherwise.

There have been Academy teams that relied solely on a couple of star players to carry the team then there has been a year dominated by 10 or 11 players from the same class year but this year was different. They had a few players with prior varsity experience, several more with competitive soccer experience but then there were those that joined the program with little to absolutely no experience. It’s never an easy task to play your first competitive form of soccer at the high school varsity level but it has been done before – I did it during the program’s first year along with a couple of my teammates.

There are moments during the course of a season that are similar to those in life. They have the potential of breeding leaders not only between the white lines on the soccer field but leaders of the next generation. Undersized, less experienced and even girls against boys, this team knows not to give up. There were plenty of opportunities for a team to pack it in when things were not going their way but that just does not happen here. It was vital for team leaders to rally the troops in the middle of the season and keep them working hard after each heart breaking loss. There will be games where the results will not come out in your favor but that does not mean the entire day was a waste – they rarely are at this age. The difference between the great teams and the rest of the pack is they take yesterday’s efforts and mistakes and incorporate them into a better tomorrow – into a more successful tomorrow.

They could have quit before the season was done but that is not way of Academy soccer. There may be different players year after year who wear the black and gold uniforms but tradition never graduates through the doors at the Academy.

My toughest loss in the two years that I played for the Eagles would have been a 1-0 loss to Highland Park in the GMC Tournament of 2004. We had previously lost to this team twice in the regular season by a combined score of 10-1. We were taught not to care what the score was in the regular season and believed we could keep up with the team step for step, play for play. It was probably the toughest one to swallow because that game seemed to be hardest we collectively played as a team even though we failed to capitalize on a couple of scoring opportunities. I know the motto has long been “next touch” for a while and apologizing for mistake is a big taboo around this year’s team but that was the one game I apologized to my teammates. It didn’t matter to me that I had made plenty of crucial saves in that made, stopped a penalty kick late in the second half to keep the game at 1-0. The one goal I did allow that game came off of a free kick just outside the box that had managed to roll past my fingers as I dove for the far corner.

I probably played the game of my life that Saturday – making saves that I had no right to make and stopping shots that would have gone in on any other day. However, that is what happens when there is a team chemistry built on confidence and trust. My backs knew they could come and talk in between plays to offer suggestions. The midfielders knew that if the goalkeeper was yelling, they would lend me an ear while continuing to focus on the defender. There are no individual feelings hurt during the game. You win and lose as a team. The standings following every game say whether Academy won or Academy lost. It doesn’t say the defenders lost the game, the forwards won the game or the goalkeepers forced the tie. Each and every result happens as a group.

We celebrated every victory with respect because we had come to a realization of what kind of dedication and hard work it took to get it but more importantly, we picked each other up after each and every heartbreaking loss. We took pride in the way we played and therefore personally took it upon ourselves after every loss personally and used it as motivation for the next practice, the next game.

It was one heck of an experience to work with the 23 people of the Academy varsity squad and I can only hope it was half as much of a learning experience for them as it was for me to be around them all year long. I was proud to be a part of this team this year and if opportunities allow, I would love to continue to help the program that has given me so much. I fully expect the returning letter winners from this year will continue to improve and push each other in the off season to improve the team full of plenty of young talents with a lot of potential.

As the seasons continue to come and go, let us never forget that no matter happens and no matter who is playing…