Naturally Japan has a long history of earthquakes and seismic activity because it is located near major tectonic plate boundary and is also on the Pacific Ring of Fire.

As of about an hour ago, here are the latest statistics from the United States Geological Survey regarding earthquakes (greater than magnitude 1.5) that have occurred relatively near Tokyo, Japan: 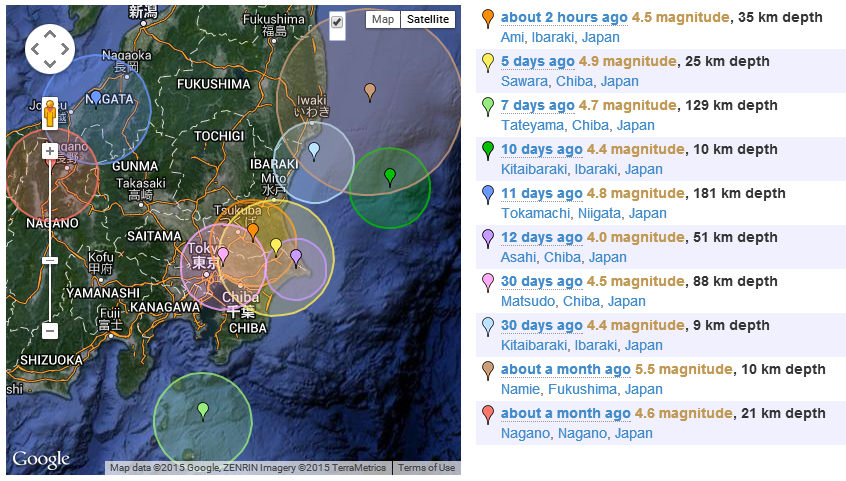 Since we landed 7 days ago, there have been three of magnitudes 4.5, 4.9, and 4.7, although I have not felt any of them personally. Given the fact that the first one this week happened on my first day of work here (it was a magnitude 4.9), it is probably a good thing. Using the statistics above of the previous year, that comes about to an earthquake every 5 or 6 days… which pretty much means that we have already had more than our fair share of the week so hopefully some quieter weeks to come.

Japan has definitely taken extraordinary measures over the years and requires most households to keep a survival kit (ours included) which consists of essentials like a radio, a flashlight, a first aid kit and enough food and water to last for a couple of days. Our introductory packet included a notice about an early earthquake detection program that notifies if an earthquake is imminent and cautions the residents to take cover.

By no means does this mean I am walking around waiting for the next earthquake to happen but it also doesn’t mean I am oblivious to the fact.