Well this potential World Series match-up is definitely going from bad to worse with each passing game now that the Phillies have returned to the World Series for a second straight year.

Here are the updated standings after the Phillies/Dodgers wrapped up. Negative 3 points for calling an incorrect series, 3 points for a correct pick but minus 1 point for each game you were off. 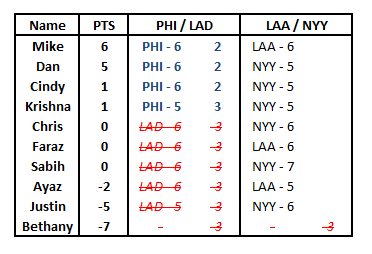 Well all series have now ended with Mike DiAmore being our leader with 4 points after the League Divisional Series. I expect everyone to have their predictions for the Championship Series in well before they start Thursday night.

Also, just a reminder: these series will now be a best-of-7 from now on – the League Championship Series and the World Series both.

Get your picks in now fools. Also if anyone wants to get in on this contest, you can do so but your score will be one less than the lowest score on the board to begin that round. It’s going to be ridiculously difficult for you to win now but that’s what you get for not participating from the start.

I didn’t know how comfortable everyone was with their names being posted so I have just used initials from your names for this update. Listed below are the predictions and the updated totals with the three series decided so far. Plenty of early losses in points for those who took the St. Louis Cardinals and/or the Boston Red Sox… plenty of -3’s in those columns. No one took the Cinderella team in the Minnesota Twins as they were swept out tonight (no one to blame but themselves on that one) but at least it looks like there will be on good series – Phillies / Rockies.

I’ll update the scoring table with names (if no one objects) following the end of the last series. The ALDS will start Friday in New York but the NLDS starts Thursday night, so make sure to have your picks submitted before the start of that game. If you’re late, I’ll probably allow before the first run is scored in the game but no point in risking your luck.

[EDIT] If I get at least 10 people I know to submit their predictions before each round of the playoffs, I’m willing to award a $25 giftcard to Amazon.com to the person with the most correct teams picked and games. If no such person exists or there is a tie, the winner shall be the person who is the closest in their prediction of the number of games in each round.

Points System Breakdown: You will get 3 points for picking the correct winner of each series. However, you will lose one point for every game that you are off in. For example if you pick Phillies to beat the Rockies in 5 games — and Phillies win the series in 7. You will be awarded 3 points for a correct winner but will lose 2 points since it was game 7 instead of 5.

However, if you had chosen the Rockies in that example you will end up losing 3 points for an incorrect pick.

Obviously, the overall leader will have to be in the positive to be eligible for the prize so don’t make a fool out of yourselves with your predictions.[/EDIT]

Well Major League Baseball’s Tie-Breaker Tuesday between the Twins and Tigers was absolutely everything MLB could have wanted from that game and more. So heading into the start of post-season play, I figured I would quickly try to breakdown the series and post my predictions. Feel free to quickly post your winners and in how many games in the comments section and maybe if there are enough players, I’ll do a giveaway at the end of the post-season for whoever has the most correct. Interested to play now?

I got a chance to see the Phillies play in person the day after they clinched the NL East and even with spotty pitching that day, they quite never says die. Power pitching and hitting will prevail in this series and unfortunately the Rockies do not seem to have much of either. Hamels and Lee will probably be way too much for the Rockies to overcome in a short series.

I love everything that Tony La Russa does with his squad year in and year out to get them into playoff contention pretty much every single year. He’s got the comeback player of the year (and ex-Blue Jay) in Chris Carpenter and having Albert Pujols in the middle of the order but all that said, I think Joe Torre and his Dodgers with Manny (even though he struggled down the stretch) will be able to prevail in the deciding game.

This is a series that you can pretty carve into stone every year. The two teams play each other just about as many times as the previous President took days off while in office so they pretty much know each other inside and out. It all comes out to strengths and weaknesses and I have to think that the Angels still struggle to hit the power pitchers. If Lester, Beckett and company are on their game with power pitching and an on-fire David Ortiz from the second half of the season can really prove to be a difference maker. I think that is probably going to be the deciding factor but the Angels’ small ball could definitely turn things the other way as the Red Sox catchers probably couldn’t throw out Benji Molina if he tried to steal a base… still I am going to favor the power arms.

This series just happened to come up last in the order I was writing them up but this seems to be the hardest one for me to decide. I would love nothing more than to see Carl Pavano pitch gems in game 2 (and 5 if necessary) against his former team to knock them out of the playoffs but I don’t think that could happen. This is a Yankee team that is looking comparable to the ones from the previous decade with their ability to win close games and having the power to blow things open. Every single fiber of me says you will regret not picking against the Yankees here but I will say they end up pulling this one out cause of a natural letdown after Twins’ playoff mentality just to get into post season play.