Anyone who knows me knows that I love stats. One of the more underrated sports related stats website has to be ESPN Passport. It is an awesome service provided by ESPN that allows you to archive all the sports events you have been to (and even watched from home) and spews out stats about how the teams have done in those games. They show a win-loss record, active winning or losing streak and how the teams have done at home and on the road in the games you saw them play. Over time, they have added medals which you can earn if you attend events and the team goes on a winning or even a losing streak.

Full link to all the stats available here on Google Drive.

Here’s a look at some of the stats for my events: (Note: I only log the games that I have attended in person)

I am certain that I missed a couple of games that I attended in person but of the 38 games I have logged in so far, there are 10 teams that I have never seen lose (3 of them I have seen on more than one occasion):

New York Mets: 3-0, 2 games at Citi Field (vs. Yankees and Chicago White Sox) and one at Rogers Center
Seattle Mariners: 2-0 (both in the same stadium but once when it was SkyDome and one as Rogers Center)
West Virginia Mountaineers (CFB): 2-0 (both at High Point Solutions Stadium)

The most frequent teams that I have seen are by far the Toronto Blue Jays and New York Yankees:

Finishing off with the medals page, I have six in total which include easy ones like checking into your first event, posting comments and attending a game on a holiday. However two cool ones that I have is “Zero Hero” which is attending a game with a shutout (I just got at the Mets/White Sox game) and “Doubleheader” which is attending two games in one day. I got that one on October 27, 2007 by watching a college football game between Rutgers Scarlet Knights and West Virginia playing a game at noon and then heading over to Madison Square Garden to see the Toronto Maple Leafs and the New York Rangers play at 7pm.

I was putting together a bucket list earlier which I will post once it is fully developed later on this summer and someone mentioned to me that going to all the sports arenas and stadiums should be one of the items on that list. That got me into thinking exactly how many of those places I have seen myself.

The list is a little bit longer than I would have originally thought it to be although it includes not only the places I have actually seen a game (indicated in bold) but also the stadiums/arenas that I have seen in person but didn’t necessarily watch a game there. The current list stands at 39 sporting venues, which includes repeats such as Air Canada Centre and Madison Square Garden as they play host to multiple professional teams, or 32 unique ones. Those venues span over 9 states, 1 province and two different countries.

A few rules to counting the sporting venues:

I have attended events in 12 of those venues which comprise of 5 baseball stadiums, 3 hockey arenas, 2 basketball stadiums, 1 soccer field and boxing match.

I’m hoping to add a couple when I am in Dallas this summer with the Mavericks, Rangers, Cowboys and Stars but I’m not sure how much time I will actually have but that is definitely on the to-do list.

I’m sure there are plenty of you out there with a longer list than me, let me see them or if you have done more in a single sport, let me know!

It will be 11 months next week since I moved north of the border and I have really gotten out of shape in that time. I used to be able to run a 6:30 mile during my best days but now I can barely pull off a 6:30 kilometer. Not bad for a 11-month layoff but I am slowly starting to get myself back into this.

Take a look at the incline, all the way at the bottom of the attached picture. The run begins with an immediately down hill run and hits rock bottom about a kilometer in which also happens to be where my non-stop running hits a wall. The huge 13 meter climb a little before half way into my run is a real killer but that’s something I’m gonna use to get myself back in shape again.

Hopefully towards the latter half of this year, I’ll participate in a 5 or 10k run either here or back in the States.

Anyone else here on RunKeeper.com? If you are, get me on your street team and let’s run one of these races later in the year. 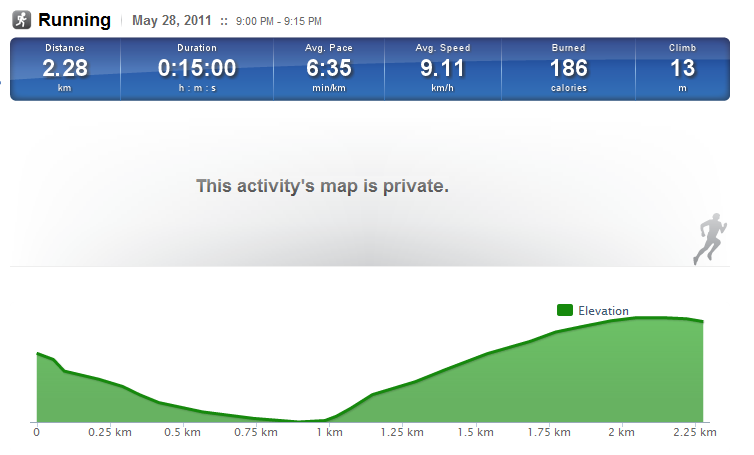 Also I was shown this video yesterday and maybe it is correct, maybe it is not but I raises valid points about how you run and how it may end up hurting you. Take a quick look and let me know what you think.

On a completely unrelated note with the Stanley Cup Finals starting tomorrow, watch this clip. Skip to around the 0:30 mark:

I had yet to decide whether I thought the baseball system as it is, was broken or not but after doing just some simple research, I think I am ready to say that it is okay… for now.

There is no denying that there are the lopsided salaries in just a handful of teams but there have also been 9 different World Series champions (Arizona, Anaheim, Florida, Boston, Chicago (AL), St. Louis, Philadelphia, New York (AL), and San Francisco) in the past 10 years as well as 14 different teams (add Colorado, Detroit, Houston, Tampa Bay and Texas) who have played in the World Series in that same stretch of time. That is just about half the league.

After that, make note of the fact that Minnesota, Detroit, Cleveland, Oakland, Seattle, New York (NL), Atlanta, Chicago (NL), Cincinnati, Milwaukee and San Diego have also made the playoffs in the last 10 years and that brings the total up to 25 teams leaving just the Toronto Blue Jays, Baltimore Orioles, Kansas City Royals, Washington Nationals, and Pittsburgh Pirates to not make it into the postseason.

That is a pretty awesome system where 83% of your league has been in the playoffs in the last decade but baseball has done a really poor job in trying to capitalize off of that. Instead all we hear in the news is of steroids, players not signing extensions and botched efforts to try and keep the all star game relevant.

I would also be interested in seeing similar numbers for other major sports and if I had to guess, I would say NBA is the worst in terms of percentage of teams making the post season in the last decade but I would think NHL and NFL are right up there with the MLB. Maybe if I get time over the weekend, I will pull up those numbers as well.

As for the 5 teams left to make the playoffs since the 2001 season, who do you think will make it there first? I will say either the Washington Nationals or the Toronto Blue Jays but I don’t think either of those two will happen this year, or the next.

I haven’t gotten a lot of chances to write recently primarily because of work consuming about 12 – 13 hours of my day. I am out of the house at 7 a.m. most days and end up taking the train (or bus) back after 6 p.m. I am a week away from completing my initial three month contract here at Chartis and it is remarkable how quickly time has gone by. There has been plenty of chatter about converting me to a full-time employee now but I have yet to receive an offer, so I will withhold further comment on that until there is actually something to write about.

As another promising but disappointing Blue Jays season winds down, it is important to note that the Yankees have played six games in Toronto since I have moved here. The more interesting fact is that the only two games they have won from those six happened to be the ones that I attended – including the Tuesday night. Jays have to find a way to turn things around quickly as the division seems to become more and more competitive every year.

Hockey season is right around the corner with the Leafs playing their season opener against Montreal a week from today (and about 3 blocks from my work). You can already see the swarm of blue and white jerseys around downtown with people heading towards the preseason games around the same time as I leave work.

I recently searched for Maple Leafs tickets as I have never seen them play at home but the cheapest available at the moment for a Hockey Night In Canada game is $100+ a ticket for a game in February. Maybe holding out on buying a Leafs’ ticket is the best option right now as I’m afraid the hockey season will be disappointing again as a Leafs’ fan. The Maple Leafs have missed out on the postseason in each of the last five years and the primary goal for Toronto this year will be to end the longest playoff drought in the franchise’s storied history. Phil Kessel and Dion Phaneuf are clearly the two new stars on the team and hopefully can spark something miraculous.

This is the place where legends are made of. Just like the players who ended the Red Sox World Series drought, the players who bring home the championship to teams like the Cubs or the Maple Leafs and hopefully something good happens soon.